Task: Create a Bunker to withstand a volcanic eruption

The first thing that I did was research the aftermath of a volcanic eruption. I found out that the lava flow can burn down different types of structures, destroy crops, create the possibility of mudslides, cause mass power outages, and contaminate the freshwater supply.  With technology today, I thought to myself that there has to be a way to create something to stop all of this destruction.

I went back to the internet and searched for what type of materials can withstand extreme heat. One metal which I found that would meet this goal is titanium.  This makes sense since I know that the US government used titanium in the blackbird SR-71 which was the fastest plane ever created.  The plane had to withstand speeds 3.5 times the speed of sound and masses of heat caused by the air flowing over its body.

I then thought about what would happen if I created a bunker or shelter to protect the people that are impacted by lava flows.   With the proper design, I think the bunker can be used as a temporary emergency shelter.

Protected by thick walls of titanium and insulation, the bunker would be self-contained for up to six months with up to 1000 people.  This bunker is multi-level. It contains an area to grow crops, a water filtration system, and climate control capabilities, all while using the latest technology in terms of waste management, gray water system for irrigation.  It also has self-contained water reservoirs to provide fresh water.

The two most difficult parts of the design are allowing for communication with the outside world and bringing in enough fresh air.  The solution to the fresh air can be done through a series of filters along with controllable air vents that can be raised above any volcanic dust.   Hopefully, the communication system will be able to be activated once temperatures are saved for the delicate equipment.

In this project, I learned 3 key things.  First, I needed to identify a problem I wanted to solve, Second, I was forced to use my imagination and combine it with real-world solutions.  Finally, I learned how to conduct research to learn if my ideas were possible and if they are what type of materials I need to make things work.

Pictures of the project: 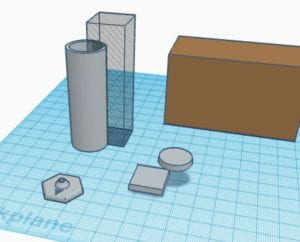